The Impossible Burger: Boon or Risk to Health and Environment?

Impossible Foods’ meatless burger is touted as healthy and environmentally responsible. Claire Robinson and Dr Michael Antoniou take a look at the evidence behind the hype.

The high-tech food company Impossible Foods is asking health-aware and ecologically conscious consumers to help the environment by eating its plant-based “Impossible Burger”. The burger is available in restaurants across the US.

Impossible Foods is pitching its product on the basis of claims that it is a healthy and environmentally responsible choice. But a look at the facts gives a different picture.

The Impossible Burger is a GMO food

A key ingredient of the Impossible Burger is a protein called soy leghemoglobin (SLH) derived from genetically engineered yeast. SLH contains an add-on component known as “heme”. In its natural form, SLH is found in the root nodules of soybean plants. Impossible Foods has taken the SLH gene from the soybean and used genetic engineering technology to insert it into a strain of yeast. The resulting genetically modified (GM) yeast is grown at an industrial scale in vats, a process known as fermentation. The SLH is then isolated from the yeast and added to the Impossible Burger.

The heme component of SLH in the Impossible Burger gives it a meat-like taste and makes it “bleed” like rare meat. (This component mimics the effect of heme in natural meat such as beef, where it is principally present as part of two proteins, hemoglobin in red blood cells and myoglobin in the muscle of the meat.)

The Impossible Burger is not made from organically sourced or Non-GMO ingredients, so there are other substances present in this product that in all likelihood are also derived from GM organisms (GMOs) – namely soy protein isolate and a number of vitamins – which we shall return to later in this article. So overall, the Impossible Burger is a GMO food.

The company maintains that the key ingredient of the Impossible Burger that gives it a meaty taste, SLH, is safe to eat. It wanted the US Food and Drug Administration to confirm safety, providing reassurance for consumers. But the FDA refused to do so, as revealed in documents obtained in 2017 under a Freedom of Information request by the ETC Group and other environmental and consumer organizations.

In its communications with Impossible Foods, the FDA expressed concern that SLH has never been consumed by humans and may be an allergen. The agency pointed out that the safety information submitted by Impossible Foods was not specific enough: “Although proteins are a part of the human food supply, not all proteins are safe. Information addressing the safe use of modified soy protein does not adequately address safe use of soybean leghemoglobin protein from the roots of the soybean plant in food.”

The FDA concluded, “FDA believes that the arguments presented, individually and collectively, do not establish the safety of SLH for consumption, nor do they point to a general recognition of safety.”

Slight changes in proteins can have big impacts

Dr. Michael Hansen, senior scientist with Consumers Union and member of the GMOScience advisory board, agreed, telling Wired Magazine: “Just because proteins have similar functions or similar three-dimensional structures, doesn’t mean that they’re similar. They can have a very different amino acid sequence, and just slight changes can have impacts.”

Such impacts could include unexpected toxicity or allergenicity.

Another safety issue raised by the FDA is that the SLH product extracted from the GM yeast, by Impossible Foods’ own admission, is only 73% pure. The rest is made up of 46 additional yeast proteins, some of which are unidentified. None have been assessed for safety by the company.

Impossible Foods says, “The non-target proteins which may co-purify are expected to be safe for consumption based on history of safe consumption of the whole yeast in animals.”

The problem with Impossible Foods’s statement is that animals are poor predictors of human allergenicity. While it’s unlikely that these yeast proteins are overtly toxic, the yeast does not seem to have been part of the human diet, so we don’t know if it could cause immune reactions and allergies.

Impossible Foods argued against allergenicity, partly on the basis that a bioinformatics analysis using the Allergenonline database did not show a greater than 35% similarity to known allergenic proteins. But the FDA was unconvinced, countering that the approach used in Allergenonline “does not provide evidence of the lack of sensitization/allergenic potential of SLH.” The agency added, “Analyses using other software, such as SVM module-based software, indicate that SLH could be an allergen.”

In spite of all the FDA’s advice, the company decided in any case to sell the Impossible Burger to the public.

It may be no coincidence that 20 minutes after eating an Impossible Burger for the first time, a man Tweeted, “Went into anaphylactic shock & taken to ER. Never happened to me before…”. His Tweet (shown here) has since been deleted. 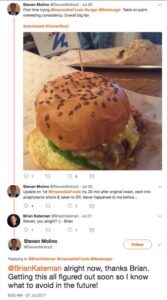 An incident of anaphylactic shock is a severe, potentially life-threatening allergic reaction which can occur within seconds or minutes of exposure to something you’re allergic to.

This man’s report is not definitive proof that ingredients in the Impossible Burger were to blame for the anaphylactic shock. But given the FDA’s warning, and the timing of the onset of the man’s symptoms, there is plenty of reason for caution.

Dr. Michelle Perro, pediatrician and executive director of GMOScience, commented, “Food allergies are so commonplace in the American landscape that California schools are now required to have Epipens to treat life-threatening allergic emergencies. The epidemic of food allergies in our population affects approximately 40% of American children – a number that is likely underreported.

“Dr. Arpad Pusztai, one of the first researchers of GM food safety, raised the issue that newly modified proteins are foreign to our immune systems, which could make them immunogenic and ultimately allergenic. For example, a normally non-allergenic protein in beans (alpha-amylase) was found to cause immunogenic and allergic-type reactions in mice once it had been genetically engineered into peas.1

“Given these facts, to introduce another potential allergen into the food supply before it has been tested appears highly irresponsible.”

The Allergenonline database cited by Impossible Foods is housed at the University of Nebraska and is described as “a tool for evaluating the safety of proteins” included in foods through processing or genetic modification”. It is funded by biotechnology companies and is managed by the former Monsanto scientist Richard E. Goodman.

Impossible Foods contracted Dr. Goodman to assess the potential allergenicity of SLH as part of its submission to the FDA. According to the submission, “Dr. Goodman’s expert opinion concluded that soybean leghemoglobin is very unlikely to present a risk of dietary allergy to consumers.” Dr. Goodman also published his opinion in a peer-reviewed article co-authored by an Impossible Foods scientist.

It is to the FDA’s credit that it was not swayed by the “expert opinion” of Dr. Goodman and refused to give its safety stamp to the Impossible Burger. Impossible Foods withdrew its request to the FDA for GRAS (Generally Recognized as Safe) status for SLH in November 2015. However, it is a sad indictment of the US’s regulatory system that the company was nevertheless legally able to go ahead and launch the product onto the market in 2016.

A major plank of Impossible Foods’ pitch for its meatless burger is the heavy environmental impact of industrial-scale livestock farming . According to the company’s website, “The way the world produces meat today is taking an enormous toll on our planet. According to livestock researchers, animal agriculture uses 30% of all land, over 25% of all freshwater on Earth, and creates as much greenhouse gas emissions as all of the world’s cars, trucks, trains, ships, and airplanes combined.”

Almost all of these ingredients are highly processed. Textured wheat and potato proteins are processed foods that take energy to manufacture. The SLH in the Impossible Burger is extracted from GM yeast, which is fermented in large vats in an industrial setting. The yeast must be grown in a nutrient-rich broth made of chemically synthesized ingredients that are themselves industrially manufactured.

The vitamins in the burger are another example of highly processed ingredients. The vast majority of vitamins are not natural extracts from foods but are synthetic. They may be produced by chemical synthesis or from biological processes using algae, bacteria, or fungi (including yeasts). The bacteria may be selectively bred or mutated for higher production using mutagenesis agents like chemicals or UV light, or they may be genetically engineered.2 For example, vitamins B2 and B12 can be produced using genetically engineered bacteria in a fermentation process.3

All these industrial processes are expensive. Crucially, they are also energy-hungry and materials-hungry. And that’s without considering the environmental footprint of the pesticides and fertilizer applied to the non-organic crops that go into making the Impossible Burger.

Taking into consideration the whole complex manufacturing operation, how much greenhouse gas is generated in the synthesis of all those highly processed ingredients? How does the Impossible Burger’s environmental impact compare with grass-fed organic beef production? Or with the production of non-GMO plant-based burgers like Beyond Meat’s, which is marketed based on its non-GMO status?

These are key questions, which Impossible Foods has failed to address. By simplistically confining the notion of environmental impact to the presence or absence of cows in its burger, it completely misses the bigger sustainability picture. And in that bigger picture, a burger consisting of a novel, potentially unsafe protein produced from GM yeast, mixed together with a host of ingredients that are chemically synthesized or brewed up in fermentation vats, does not sit well.

The agrochemicals applied to plants from which ingredients for the Impossible Burger are obtained may in turn bring another layer of health risks. The greatest risks may come from mixtures of chemicals, which have not been tested for their combined and cumulative effects. But a close look at just one chemical, the herbicide glyphosate, is enough to raise concerns.

Non-organic wheat fields are sprayed with herbicides based on glyphosate – named by the World Health Organization’s cancer agency IARC a “probable carcinogen”.4 In some cases, glyphosate is sprayed on the growing crop just before harvest, potentially leading to high levels of residues in the harvested crop. Glyphosate has been found at widely differing levels in processed foods containing wheat – and the more highly processed the product, the higher the levels seem to be.5

While the levels ingested from glyphosate-contaminated foods are claimed by the industry and regulators to be safe, there is a growing body of evidence indicating that the so-called “safe” daily intake level for glyphosate set by regulators may in fact be potentially toxic.6 The Impossible Burger – as well as meat-based burgers – may contain residues of glyphosate that will add to the consumer’s daily intake level.

What the public wants

In conclusion, the claims made for the Impossible Burger’s health and environmental credentials are at best questionable and at worst highly misleading. But the more fundamental point is that this burger, the product of poorly tested novel and synthetic ingredients and GMOs, represents the opposite of what an increasingly food-aware and environmentally conscious public wants: pure, minimally processed natural ingredients, free from GMOs, transparently sourced, and produced with as few chemical and synthetic inputs as possible.

Claire Robinson is editor at GMWatch, a public news and information service covering GM foods and their associated pesticides. Michael Antoniou, PhD is a research group leader and teacher in molecular genetics at a leading London university.